Over the course of the past 100 years, Eastwards from South America to South East Asia (and everywhere in between), official history records that US governments have repeatedly created and used terrorist groups to attack foreign governments and populations who foolishly refused to view the world through a stars and stripes-tinted lens.Two examples among dozens include Nicaragua and Indonesia.

At a 1985 hearing of the Senate Appropriations Subcommittee on US operations in Nicaragua, Sen. Patrick J. Leahy (D-Vt.) told then Secretary of State George P. Shultz: “There is a growing body of evidence that the contras have committed widespread violence against the civilian population. I am concerned that money from our government goes to an organization that commits atrocities. I have been given affidavits by victims of atrocities, terrible photographs.”

Shultz was being rather coy here. The US government viewed the democratically-elected Sandinista government as a threat to the ability of American corporations to exploit Nicaraguan resources. Continuing in the tradition they had, by then, established in at least 5 other South American nations that rejected US corporate plunder of their nation, the US government decided to fund, arm and train a terrorist group known as the ‘Contras’ or ‘counterrevolutionaries’.

For the next ten years, the Contras carried out widespread terror attacks against the civilian population that killed at least 45,000 people in the tiny central American nation. The CIA even produced a ‘terror manual’ for the Contras called Psychological Operations in Guerrilla Warfare that advised on how to rationalize the killing of civilians. For almost ten years these CIA terrorists busied themselves by:

In his case study of the Nicaragua Vs United States dispute, Professor of military law at the University of Amsterdam, Terry Gill wrote: “The U.S. played a very large role in financing, training, arming, and advising the contras over a long period, and the contras only became capable of carrying out significant military operations as a result of this support.”

In 1966 with the full backing of the Johnson government, Indonesian General Suharto staged a violent coup against the democratically-elected President Sukarno. According to senior CIA operations officer Ralph McGehee, the CIA forged a document purporting to reveal a Communist plot to murder Indonesian military leaders that Sukarno used to seize power. US and British-supplied weapons enabled Sukarno to begin a purge of alleged “communists”. Up to 1 million people were murdered over the next two years.

The US government and its European accomplices wasted no time in cashing in on the ‘new opportunities’ that Suharto’s brutal regime providedthem. Even as the slaughter was ongoing in November 1967, Time-Life Corporation in Geneva held a 3 day conference at which most of the Western corporate giants were represented. The Freeport company got a mountain of copper in West Papua. A US/European consortium got the nickel. The giant Alcoa company got the biggest slice of Indonesia’s bauxite. America, Japanese and French companies got the tropical forests of Sumatra.

Immediately after this US-backed genocide, the 1968 US government National Intelligence Estimate (NIE) on Indonesia (NIE) 55-68, December 31, 1968 stated that “the Suharto government provides Indonesia with a relatively moderate leadership“. Over the next 25 years, Suharto presided over the slaughter of millions more in Indonesia and East Timor, again with the full backing of successive US administrations.

But the attitude of US and British government officials to this kind of wanton slaughter of civilians for profit is perhaps best exemplified by the comments of former junior British Defense Minister Alan Clark, the man responsible for ensuring a continuous supply of British weapons to the Suharto regime in the late 90s. Asked by Australian investigative journalist John Pilger if it bothered him personally that he was causing such massive human suffering, Clark responded:

“No, not in the slightest, it never entered my head.”

Pilger continued: “I ask the question because I read you are a vegetarian and are seriously concerned with the way animals are killed. Doesn’t that concern extend to humans?”

For her part, British PM Margaret Thatcher was so enamored with Suharto’s blood lust that she described him as “one of our very best and most valuable friends“.

Tried and tested tactics in Syria to contain Russia

With its vast oil reserves, the Middle East has always been very ‘strategically important’ for the ‘national interests’ of US empire. Every time those interests were threatened, like when a ‘reformer’ was democratically elected, or snuggled up to Russia, the Empire’s strategy of choice was to ‘stir things up’. Back in 1957 for example, when the Syrian government would not cooperate with Western “anticommunism”, the US and British governments hatched a plot to create “provocations” in Syria that were to be used as justification for an invasion by the military of the then client government in Iraq. Details about this conspiracy were revealed by a “Working Group Report” uncovered in 2003 among the papers of British Defence Minister Duncan Sandys:

In order to facilitate the action of liberative [sic] forces […] a special effort should be made to eliminate certain key individuals [and] to proceed with internal disturbances in Syria. CIA is prepared, and SIS (MI6) will attempt to mount minor sabotage and coup de main [sic] incidents within Syria, working through contacts with individuals […] a necessary degree of fear […] frontier and [staged] border clashes [will] provide a pretext for intervention […] the CIA and SIS should use […] capabilities in both psychological and action fields to augment tension. Syria would be “made to appear as the sponsor of plots, sabotage and violence directed against neighbouring governments“

In case you haven’t figured it out yet, the situation in 1957 is almost a carbon copy of events today, except that rather than using the Iraqi military to invade Syria, the US government used its own invasion and occupation of Iraq to create a breeding ground for a proxy army called “ISIS” that has been used to invade Syria. A recently declassified secret US Defense Intelligence Agency document obtained by public interest law firm, Judicial Watch makes it clear that the US government and its intelligence agencies fully anticipated that this would occur. Admitting that their support for a group of psychopathic head choppers could “establish a declared or undeclared Salafist principality in Eastern Syria” they concluded that this was “exactly what the supporting powers to the opposition [the USA] want, in order to isolate the Syrian regime.” 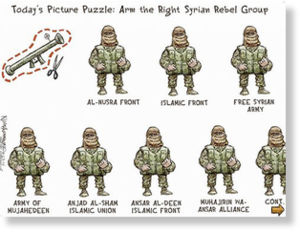 To reject the suggestion that the US empire was directly involved in the creation of the Islamic State requires a willful ignorance of official US history and an assiduous disregard for official US government documents, both of which point directly to ISIS being a creation of the US government in the same way the Contras and the Suharto regime were.

When we consider the ‘essence’ of ISIS or “al-qaeda” before them, what we see is a well-funded group whose goal is to wage both a physical and ideological war on moderate Islam while (largely psychologically) terrorizing Western populations. The physical war is pursued by militarily attacking moderate Muslim governments in an effort to over throw them (Iraq, Libya, Syria, Hizb’allah in Lebanon). The ideological war takes the form of blackening the image of Muslims by committing the most horrific crimes in the name of Islam that are then beamed directly into the brains of Western audiences by the Western media. In this way, the actions of ISIS and ‘al-qaeda’ dovetails with Western powers’ long-standing Middle Eastern strategy of supporting the most extreme Islamic groups and governments against every secular, moderate pan-Arab movement. Strange coincidence.

The creation of ISIS is merely the latest, and arguably most desperate, attempt by the US empire to secure its faltering position of global hegemon – a position that has always been threatened by the possibility of a Eurasian alliance of Russia, China and Europe. The monstrosity of ISIS is therefore world war by other means, i.e. ‘4th generation war’ or the use of proxy terror groups, dirty tricks, black propaganda and economic sanctions against all opponents, domestic and foreign. Of course, all of this is outrageous conspiracy theory. So outrageous, in fact, that even the ‘Islamic State’ itself doesn’t believe it! As some CIA operative Jihadi wrote in the latest issue of ‘Dabiq’ ISIS’ glossy magazine:

“According to these theorists, almost all the events of the world were somehow linked back to the kuffar, their intelligence agencies, research, technology, and co-conspirators! Conspiracy theories have thereby become an excuse to abandon jihad.”

Of course, the truth is that there are no conspiracies, everything happens by coincidence, except of course when, all by themselves, a relatively small group of jihadi mercenaries are able to hold off the military forces of Syria, Iraq, Iran and Hizb’allah, annex land from two of those countries and establish their own caliphate. Then it’s not a coincidence. It’s a miracle.

By the way, if the spread of conspiracy theories is causing an exodus from ISIS’ ranks, wouldn’t it make sense for the US, Canadian, British and French governments to widely promote such theories as part of their existential war against the hated jihadis? And in the case that they do see the logic of such a strategy, could I apply for a job in the CIA?

I’ll leave you with a somewhat rhetorical question; given that the US government has a track record of creating, funding and arming terror groups to carry out terror attacks against civilian populations, resulting in the deaths of millions of mostly innocent people over the last 60 years, who can say with any conviction that the same cabal of US empire builders did not have a hand in the 9/11 attacks that has been used to justify every US political and military action in the Middle East (and elsewhere) since that ‘fateful’ day?

3 thoughts on “Is ISIS a creation of the US government? Do bears shit in the woods?”