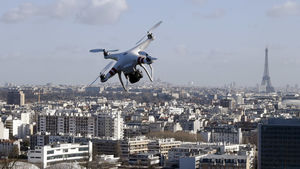 British security services, known for their hysterical obsession with terrifying the British public through repeated bogus terror threats, recently used the British gutter press to claim that IS (the CIA/Mossad/Saudi proxy army formerly known as ISIL/ISIS) could use easily-affordable home-assembly drones to drop explosives on open-air sporting and cultural events (but not British government or intelligence service buildings, of course), causing mass casualties which could be filmed by on-board cameras. These videos would then be handed to Rita Katz and her SITE group for uploading to Youtube, thereby ensuring the drama reaches the widest audience.

An unnamed counter-terrorism source, probably from MI5’s department of propaganda, told the British Daily Express that “terror groups had been trying to launch a drone-borne bomb attack for some time, as these machines are getting more hi-tech every year.” While the unnamed MI5 propaganda source did not reveal how he knew the intentions of jihadi groups, the fact that British intelligence has a long track record of grooming militant Islamists to carry out “terror attacks” against civilians, meant he didn’t have to.

As regards drones being used for nefarious covert purposes aimed at scaring the general population and, at times, foreign governments; on several occasions over the last two years, hi-tech, military/Western intelligence agency-grade drones have buzzed several of France’s nuclear power stations, and the home port of four nuclear submarines and the Sainte-Assise Naval command and control center near Paris. Reports indicated that the drones were of such high spec. that police helicopters were unable to keep up with them.

In the most recent event in late February, five drones are said to have flown over landmarks in Paris on two nights in a row, including the US embassy, which may well have been the command-and-control center for the operation. The obvious goal of these mystery drone flights is to send a message directly to the French government and military that they are being watched and are vulnerable. After all, if a crazed ISIS jihadi were at the controls, he would surely by now have taken the opportunity to drop one of those “explosives” that the unnamed British intelligence official claims ISIS drones are capable of carrying.

No indeed, by flying drones over French naval bases and command centers, the message from the US government to the French government, which at the time was considering making good on its promise to sell two French-made Mistral war ships to Russia, was very clear: “you’re vulnerable, now do what we tell you to do.”

Speaking of “ISIS”, where do they get their money from anyway? I mean, it takes a lot of cash to run an army capable of holding back the combined might of the militaries of Syria and Iraq and Hizb’allah and, supposedly, with the help of the US and several EU nations (although who, exactly, the US and EU are helping in the conflict is open to debate). Some have said ISIS has been selling stolen oil off the back of trucks, but that’s hardly a get-rich-quick scheme. A more plausible explanation for ISIS’ deep pockets comes from a recent statement by Russia’s anti-drug chief, Victor Ivanov, that ISIS’ economy is based on the illegal drug trade. Speaking at a recent international conference in Africa, Ivanov said that “Illegal drugs form a sort of gold and foreign currency reserves for quasi-state groups” like ISIS who made up to $1 billion annually from Afghan heroin trafficked through that country. 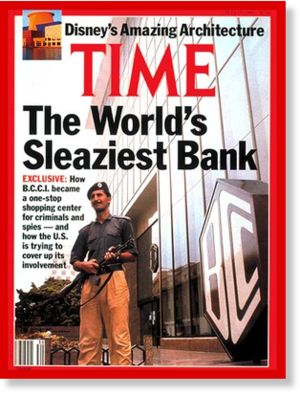 The story of Afghan heroin is an interesting one. It is a matter of public record that the CIA trafficked $billions in heroin in South America and the Asian ‘golden triangle’ before, during and after the Vietnam war. Today, Afghanistan is the world’s #1 producer of heroin. But it wasn’t always so. Just before the US military invaded in 2001, the Taleban had banned the growing of poppies, almost eradicating the heroin trade in Afghanistan. But within a few years of the US occupation of the country and the ‘defeat’ of the Taleban, opium-poppy production skyrocketed.

Afghanistan was attacked on the pretext of getting revenge for the 9/11 attacks, despite the fact that no one from Afghanistan had anything to do with 9/11. So it’s difficult to avoid the conclusion that an increase in opium yield was at least one of the real reasons for the US invasion and occupation. Of course, coincidence theorists would say this heroin glut is merely a… well, coincidence, the implication being that the US government or its “intelligence” agencies would never plot to make large amounts of money from illegal activity (yes, such people are morons). But that is to ignore the very impressive track record the CIA has in drug trafficking, including Afghan heroin.

As historian Alfred McCoy revealed, when the CIA launched an operation to train and arm the Taleban in the 70s and 80s against the Russians, they used Pakistani intelligence to run it, Afghan heroin to finance it, and BCCI to launder the money.1

So if “ISIS” ever does drop explosives from drones on pasty white westerners’ heads using income from the Afghan heroin trade, then all claims for compensation should be addressed to CIA Headquarters, Langley, Virginia. No response should be expected though; CIA HQ is full of coincidence theorists.