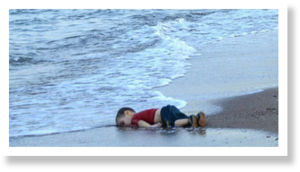 Perhaps more than any other crisis in recent years, the current ‘immigrant’ crisis in Europe has exposed the profound moral bankruptcy of Western society as represented and directed by white men and women in positions of political and economic power. But perhaps ‘moral bankruptcy’ is the wrong phrase to describe the essence of the problem, because it suggests that Western government policy makers ever had a functioning moral compass or genuine concern for the ‘other’.

A cursory yet objective glance at Western powers’ domestic and foreign policies over the course of the last 100 years shows a repeated penchant for exploitation, abuse, insatiable greed and mass murder, all under the guise of ‘fiscal responsibility’, ‘peace keeping’, ‘foreign investment’, ‘fighting terrorism’ or some other paramoralistic hokum. If you don’t agree, then you’re probably an authoritarian follower, emotionally or ‘spiritually’ unable to accept such a truth; or you may have ingested too much ‘truth’ from Fox or BBC news. A strict regimen of abstinence is advised.

Normal humans have a remarkable ability to lie to themselves, usually to justify things that make them ‘feel good’, or that are necessary for survival. Put another way, the human mind has the ability to justify to itself today what yesterday it could not. We can, for example, remark on the cuteness of a young calf one day and kill it and eat its flesh the next.

Ideally, what makes humans feel good would be synonymous with what they need to survive. At their foundation, human needs are quite simple: cooperation with others, a sense of community and access to adequate food, water and shelter. ‘Mother nature’ has provided more than sufficient renewable resources for all species on this planet to thrive. Some species of animals on this planet even kill their own kind, but always in the context of survival. So killing for survival is not a moral question, and therefore not a ‘problem’ for any society.

A hardwired genetic or moral ‘code’ in all normal humans and animals appears to act as a safeguard against any species on this planet deviating from the ‘natural order’ and engaging in wanton destruction of its environment or fellow beings, even in ‘hard’ times. In this way, the continuation of the species and its habitat is secured. By now, I hope you can see where I’m going with this.

Human beings are the only species on this planet that produces members who appear to kill for nothing more than the ‘fun’ of it. This seems to be a deviation from the ‘natural order’; certainly, such individuals are not ‘normal’, at least in the sense that they appear to be a relatively small minority. Trophy hunters are one example of this deviancy, but their ethical excesses are insignificant compared to the licentiousness of the aforementioned Western government policy makers. It seems reasonable to conclude that a human being that nonchalantly sanctions or engages in the unnecessary murder of other humans beings is missing a conscience or incapable of internalizing the moral code that prohibits such depravity outside of the context of survival. Such people are more appropriately described as nondescript ‘creatures’, because they don’t even meet the criteria to be called animals.

At the local social level, those who must live with these creatures generally experience significant problems in the form of repeated anti-social behavior. At a global level, where such creatures have insinuated themselves into positions of power over millions or billions of others with the ability to command armies, the problem manifests as never-ending war, slaughter and widespread social chaos, all based on some trumped-up, ostensibly ‘noble’ pretext: the lie or narrative used by the creature to justify the ‘fun’ it derives from the carnage it creates. Otherwise normal human beings with a conscience or ability to internalize moral codes can have this faculty compromised or destroyed by repeated exposure to the paramoralistic narratives of such creatures, to the point where normal human beings become little more than creatures themselves.

In case I need to be explicit, it seems clear that many of our vaunted ‘leaders’ fit the profile of these ‘creatures’.

So when you hear someone say that such and such a politician, president or prime minister ‘lies’, you can understand that this isn’t technically correct. Rather, these are unnatural ‘creatures’ who have a supreme ability to lie to themselves, to casually and sincerely wash their hands of responsibility for the most heinous acts, in itself an ability born of their complete lack of anything resembling a conscience that might provoke a pang of guilt or even embarrassment at what is objectively their repeated and monstrous twisting of the truth.

This prodigious ability to self-deceive combined with access to the minds of the population through the mainstream media means that all those authoritarian followers who devotedly seek direction from such people are also deceived as a matter of course. With no conscience to bother them and no ‘soul’ to sell, these creatures, aka psychopaths in power, lose nothing. The ordinary humans under their influence however, may be risking everything by allowing that which makes them a human and not a ‘creature’ be eroded by repeated psychological interaction with the twisted ‘ethics’ of the creatures in power.

Sadly, this process of ‘ponerization’ of millions of people happens in very subtle and manipulative ways akin to the fabled ‘boiling frog’. As a result, you won’t hear much outrage from the average human being. On the contrary, most are highly invested in supporting their chosen ‘authority’ and are so ‘plugged in’ to the ‘feel-good’ narrative that, if you try pointing out to them how they are being lied to and what the truth is, you’ll see a real life example of what Morpheus meant in the movie The Matrix when he told Neo:

“You look around, what do you see? Businessmen, teachers, lawyers, carpenters. The very minds of the people we are trying to save. […] You have to understand, most of these people are not ready to be unplugged. And many of them are so inured, so hopelessly dependent on the system, that they will fight to protect it.”

In the last 4 years, the ‘creatures’ in the American government and its European stooges deliberately destroyed the societies of Syria and Libya, partly for profit, partly for ‘fun’. So go ahead and be horrified at the images of Syrian (or Iraqi or Libyan) babies washed up on European beaches, just don’t be surprised. And don’t be surprised when your apathy-turned-compassion transforms into intolerant bigotry whenever some ‘terrorist’ among the migrants kills some European(s) in another typical false-flag attack. That’s what false flags are designed for – to manipulate you – and humans are so very easily manipulated.

Most self-satisfied ‘neo-liberal’ Westerners have swallowed (and are currently regurgitating) the ‘feel-good’ narrative that the migrants are both a danger and a compliment to Europe’s ‘high democratic ideals’ and lifestyle. If I could offer such people one piece of advice, it would be that rather than fretting about the situation, they feel grateful that the only blow back they must endure from their government’s actions is the odd migrant child or family washed up on their pristine beaches. Because if this were some other universe where the truth was universally recognized, we all might be required to look at the thousands of Syrian babies killed in the US- and EU-inspired Syrian ‘revolution’ to overthrow Assad, and concede that behind the feel-good narrative of ‘freedom and democracy’, those babies were killed for ‘fun’ in your name. Then we could move on to the tens of thousands of Iraqi babies.