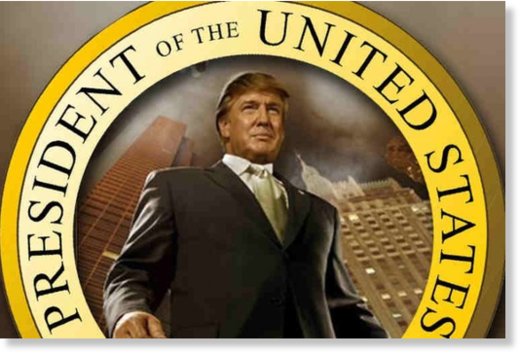 Riding a wave of anti-establishment sentiment (for one reason or another), Donald Trump has won 276 electoral votes, becoming the 45th president of the United States. His rival Hillary Clinton, the Democratic Party candidate, did not concede the election from her headquarters in New York but instead chose to do so by telephone. Rumor has it she originally planned to do so by email, but someone took her server.

Clinton suffered a major setback when the traditionally Democratic blue-collar states of Michigan and Wisconsin swung behind Trump, giving the Republican candidate a convincing lead in Electoral College votes. Both states were hit hard by a decline in manufacturing jobs as a result of corporate greed and, significantly, were lost by Hillary Clinton to Bernie Sanders in the Democratic primary. The Clinton camp then went on to use dirty tricks to deny Sanders the Democratic nomination, pushing voters into the arms of Trump.

Trump started the night with only a 16 percent chance of victory, while Clinton was given 84 percent. Following the victories in Florida, North Carolina and Ohio, the predictions were reversed.

In a speech to supporters after he secured enough electoral votes to win, Trump graciously applauded Clinton for her “great work for this country”, despite the fact that she is a corrupt warmonger and supporter of jihadi terrorism through her love of Saudi Arabia (and its money). Time will tell if Trump has any intention to make good on his campaign promise to open a (new) criminal investigation against the war harpy.

Meanwhile the liberal ‘left’ and ‘godless’ democrats of all stripes, in particular the rich and famous among them, grew increasingly hysterical as the count progressed and it became obvious that Trump would win.

Actress Mia Farrow re-tweeted a NYT poll showing that, as of 9:40 pm, Trump had a 55-percent chance of winning the election. As a comment on the tweet, she simply posted: “Xanax.” The Hollywood Reporter writer Lacey Rose declared “So. Much. Anxiety.” Jewish comedian Sarah Silverman seemed to despair further. “Someone give me hope,” she pleaded. Rapper/Singer and Hamilton star Lin Manual Miranda tried to calm the bunch. “Breathe,” he wrote above an attached picture with the words: “We will survive.”

Sarah Silverman finally gave up around 11 p.m with the alarmist comment: “Putin’s gonna win this thing.”

The silicon valley elite, ensconced in the rarefied Californian and pro-Hillary air, also showed signs of mounting stress and disbelief as the results came in

Shervin Pishevar, cofounder of venture capital firm Sherpa Capital, an investor in some of the biggest names in tech, including Uber, Airbnb and Slack, tweeted that if Trump wins he would start funding a campaign for California to become its own country.

1/ If Trump wins I am announcing and funding a legitimate campaign for California to become its own nation.

@shervin I was literally just going to tweet this. I’m in and will partner with you on it.

Others were quick to chime in. Path founder Dave Morin quickly chimed in with his support and offered to partner on the effort.

Markets will melt with a Trump win. Regardless of who wins this is a turning point in our nation. Serious systemic changes must happen.

Nate Silver, we trusted you.

Sam Altman, head of the influential startup incubator Y Combinator was just all around nervous.

Can’t remember the last time i felt so anxious 🙁

Andreesen Horowitz’z Benedict Evans was ready to give up on Twitter entirely.

…so, we’re gonna have to learn the hard way then.

Meanwhile, most of the ‘liberal’ media in the USA echoed these sentiments. Distinguished Professor of Economics and NY Times columnist Paul Krugman had a bit of a meltdown on his twitter account, claiming that the likely Trump win had “killed the planet” and calling it a “horrible new world” and that “life as we know it may soon be changed beyond recognition”. 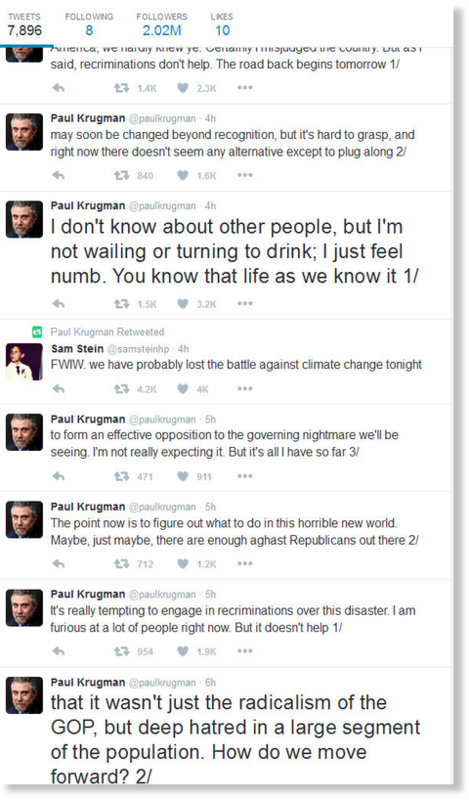 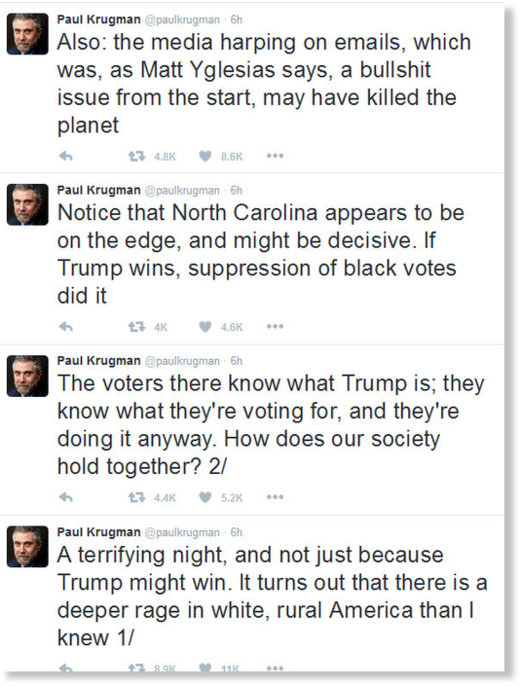 In a NY Times editorial late in the evening, Krugman opined:

“We still don’t know who will win the electoral college, although as I write this it looks — incredibly, horribly — as if the odds now favor Donald J. Trump.”

Last time we checked, the term “failed state” was used by US government officials to describe countries that it had earmarked for ‘regime change’ by way of a US bombing campaign and/or military invasion. Perhaps then Americans should look on the bright side, the Trump victory may have effected ‘regime change’ in the USA without a shot being fired.

While many establishment media pundits like Krugman are attributing the Trump win to the level of “hate in the country”, the truth seems to be that a majority of American voters rejected the policy of warmongering and destruction of living standards (especially for the poor) pursued by the Bush and Obama administrations, and strongly resonated with Trump’s promise to root out rampant corruption in Washington.

Whether or not Trump was sincere about his campaign promises and will be allowed to ‘drain the swamp’ to any significant degree remains to be seen. Under a Trump administration, there is, however, reason to expect a reduction in the level of dangerous anti-Russian rhetoric that became the hallmark of the Obama administration in recent years. And that can only be a good thing for the USA and the world.