So what drove Americans to vote for either Trump or Hillary in this week’s US presidential election? Ask the mainstream media, or any Hillary supporter, and they’ll probably tell you it was issues like liberal values and social justice. They’ll also tell you that Trump supporters were motivated primarily by racism, sexism, and hatred. In reality, Trump voters were just as concerned about social injustice. In fact, this is the issue behind most popular votes around the world these days. And ironically, Trump voters were arguably more concerned about social justice than the liberals who voted Hillary because the social justice that drove millions to vote for Trump is very different to the ‘social justice’ that concerned Hillary supporters.

Here we need to note the clear distinction between the working-class ‘rednecks’ in the USA, and some of those in a more upwardly mobile financial position. Most people who voted for Trump were the ‘rednecks’ and they did so because they are feeling the negative effects of 8 years of the Obama government’s ‘liberal’ economic and foreign policies that have continued unchanged since the ‘conservative’ Bush years (you might wonder why that is and how it works – hint: the president isn’t the ‘decider’, by a long shot). Those policies coincided with the 2008 ‘crash’ and the bank ‘bailouts’ that saw millions of American homes repossessed and many traditional manufacturing job losses, both of which disproportionately affected the poor.

It was precisely this marginalization of the most vulnerable in society that was behind the Brexit vote in the UK earlier this year. Both the British people’s vote to leave the EU and American people’s vote for Trump were not primarily votes for racism or xenophobia but votes against the neoliberal status quo under which the poor saw their living standards drop further and everyone saw war and death abroad increase.

To underline the bipartisan nature of these protest votes; in the US it was the nominally ‘left’ government candidate that was rejected while in the UK the protest vote occurred under the nominally ‘right’ Conservative government. The point being; the supposed ‘left’/’right’ political paradigm in Western democracies no longer exists. It has been replaced by a combination of neoliberalism and neoconservatism, two fancy words that describe ideologies that together form the ‘elite’ project for transnational globalization and domination of the world’s resources by corporations and their political friends through the ‘projection’ of US military power around the world. 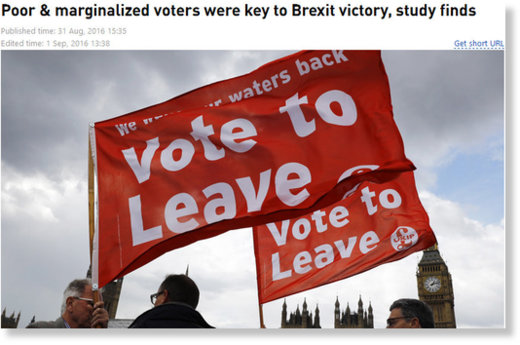 So while the mainstream media, largely supportive of Hillary as the establishment candidate, spent the last 12 months spreading the line that Trump supporters are ‘deplorables’ and that Trump himself is a raging racist, sexist, xenophobe, liar, cheat, and narcissist, this was a gross lie that hid the truth that most Trump supporters were motivated by a desperate desire for better jobs, better wages, better health care (or any health care), etc. In other words, real social justice.

When Trump was offered to these marginalized and war weary as the only alternative to Hillary, they took the offer without much further thought. In addition, based on emerging voter poll data, it seems that it was not only the poor who rejected Hillary and all she stands for, but 54% of white male college graduates voted for Trump. Broken down by income bracket, while 52% of voters earning less than $50,000 a year voted for Clinton, and 41% for Trump, of the 64% of American voters who earn more than $50,000 a year, 49% chose Trump, and 47% Clinton. So far from the core voter motivation in this election being one of ‘anyone but Trump’, it may have been closer to ‘anyone but Hillary’.

That virtually all Hillary supporters, including a large number of interested observers around the world (especially in Europe), reacted to the Trump win with horror and dismay is evidence of the success of this lie peddled by the Western corporate media. It has also caused such people to express their ‘shock’ at the sudden and ‘racist’ turn of so many Americans, or to wonder how they could have missed this barbarity lurking at the heart of the ‘world’s greatest democracy’. The same people are also forced to use the same inane narrative to explain the fact that a majority of women voters stumped for Trump. Given Trump’s comments about women, how else to explain this other than these women must all be – mentally-retarded rednecks’?

Such a ‘view’ is myopic in the extreme. Any woman who finds herself having to work 3 jobs and still unable to adequately feed her children or to have enough ‘disposable income’ to feel she has a decent standard of living, will have little problem overlooking sexist remarks or racist hyperbole by a potential president if he promises to address the serious issues that concern her and do away with the kleptocratic policies pursued by Obama (and by Clinton, and by the Bush administration).

Obviously, most of this underclass in the US are unlikely to be savvy political analysts with a deep understanding of the nature of the rapacious neoliberal/neoconservative agenda. But what they do understand is that if their livings standards have continued to fall under one government, then that government is responsible, and a change is in order. The question of whether or not Obama and Hillary, and the pathocracy they represent, are the true cause of poverty in the USA – they are – is irrelevant for the purpose of the point I am making: the underclass and war weary that voted for Trump did so NOT because they are ‘dumb racist rednecks’ but because they are the most socially marginalized and poorest in American society and Trump (sincerely or not) offered to help them. Their perspective, while simplistic, is far more perspicacious than that of the ‘progressive’, ‘neoliberal’ Hillary supporters, many of whom voted for Hillary simply because she wasn’t Trump and she, as a polished establishment figure (and a woman no less!), could be relied on to secure them in their deluded, detached and mollycoddled worldview.

Most Hillary supporters were middle and upper middle class white people, many of them young ‘millennials’ or those below the age of 35. Some, but not all, of these people have grown up in a rarefied and delusional atmosphere of ‘open society’ multiculturalism where their ‘progressive’ social and cultural values reject any notion of traditional values, and by that I mean caring about someone other than yourself and your ‘team’. It’s more than a little ironic how all those liberals who talk endlessly about ‘inclusiveness’ and ‘migroaggressions’ are the ones now rioting in the streets, spewing hateful invective and carrying out real “macroaggressions” against Trump supporters.

These are the people whose positions of relative social and economic security and lack of awareness of the levels of poverty in the USA and the brutality meted out by the US military (under Obama and Bush) to people of other nations, allows them to still believe in The American Dream and the freedom to angst over more abstract and ‘cultural’ issues. Issues like gay rights, women’s rights (but not the rights of poor redneck American women or Iraqi women or Syrian women, or Libyan women) and ‘liberal values’, where everyone is free to be as self-absorbed and ignorant of reality as they please.

The highest turnout in support of Hillary was Washington DC. Just look at the images below for a graphical representation of the radical disconnect that exists between the Washington elite and almost 75% of the rest of country, who either voted for Trump or didn’t vote at all. Again, it looks like the true message of this election from the American people was ‘anyone but elitist warmonger Hillary’. 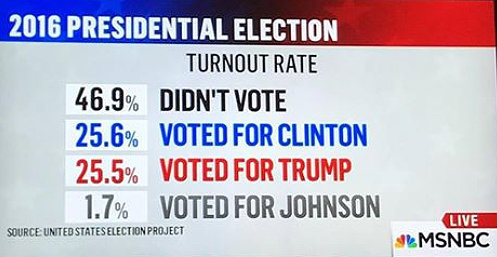 For Hillary supporters, having the first female president in the White House would secure and progress the neoliberal ‘values’, along with more transgender toilets, more immigrants and more of the wars that provide the immigrants. Of course, Hillary’s supporters know little and care less about the truth of the neo-Trotskyist ideology of American hegemonic control over all natural resources through endless war and constant regime change for which Hillary and Obama stand. All they know is what they read in the establishment ‘liberal media’: that American foreign policy focuses solely on ‘freeing oppressed people from brutal regimes’ and bringing multicultural transgenderism and ‘open society’ to every corner of the world.

So one really has to wonder about the actual intelligence of these so-called progressive millennial and Hillaryophiles in general. A short lifetime of narcissistic popular culture appears to have left them without even the semblance of a BS meter. A case in point: over the last 2 days, oceans of millennial tears have been shed over Trump and his ‘racist’ followers, and yet, 20 years ago, President Bill Clinton, a ‘lefty’ liberal and avowed sexist (and rapist, some say), said more or less the same thing about illegal immigration. So why the angst now? Is it simply the fact that Trump is open about his crassness and racism rather than hiding it behind a well polished ‘democratic’ political exterior like Hillary and gang? Or is it that most millennials were only 10 years old at the time and they couldn’t care less about history? If so, then the election of Trump might be a very good thing for America. 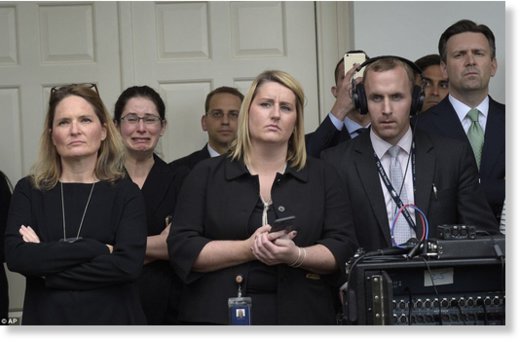 The vitally important take-away message from the result of this election is that it is a wake-up call and one that every one of us needs to hear: ‘You are ruled by a mostly unelected cabal of corrupt crony capitalist warmongers who have repeatedly bamboozled and divided you by changing political persuasion as often as you change underwear.’ In their private lives, such people hold attitudes towards the American people (and ordinary people everywhere) that make Donald Trump look like Pope Francis. And while endless attention is given to the approved and encouraged ‘concerns’ of racism, sexism and transgenderism, these stewards of the American empire are killing hundreds of thousands of people overseas and supporting regimes that arrest, torture and kill homosexuals, women and political dissidents.

So for all those who voted for Hillary because they are worried about fascism coming to America, I have news for you: Donald Trump isn’t it. When fascism comes to America, it won’t be in the guise of a crass demagogue espousing regressive policies, it will come wrapped in the flag of 21st-century ‘liberal’ and ‘progressive’ ideals, espoused by a government that slaughters millions of foreigners in the name of freedom and democracy and yet enjoys the fawning adoration of a gaggle of self-centered, self-important wannabe humanitarian do-gooders. So don’t kid yourself, American fascism isn’t looming on the horizon because of President Trump; it’s been your bread-and-butter for decades.

2 thoughts on “President Trump Is A Wake Up Call, But Not For The Reasons You Think”