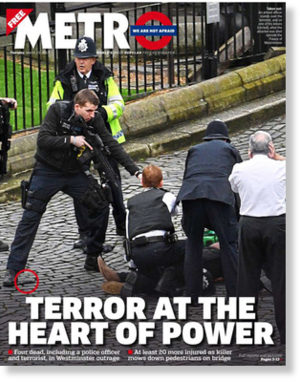 Another ‘terror attack’. Another outpouring of sympathy, this time ‘for London’. Another round of media hypocrisy that willfully ignores the obvious explanation for and solution to these kinds of incidents.

On Wednesday 22nd March, around 2.40pm, we’re told that a ‘lone wolf’, named as 52-year-old Khalid Masood, drove a black SUV along the sidewalk of the 252m-long Westminster bridge, knocking down at least 12 pedestrians and killing two of them. The SUV is about 6 feet wide and the sidewalk about 12 feet wide. There are vehicles on one side and the stone balustrade of the bridge on the other. The SUV was traveling at at least 60mph. So this was a rather difficult, if horrific, feat to carry out.

Leaving the bridge, Masood turned left towards the ‘front’ of the Houses of Parliament where he mounted the sidewalk and crashed the SUV into railings near the Carriage Gate entrance which is a ‘weak spot’ guarded by unarmed officers.

Exiting the vehicle, he tried to enter the grounds of the building and was confronted by a police officer whom he stabbed. The attacker was then shot dead by another plain clothes police officer. This was a clear attack on the ‘center of power’ in the UK that was designed to and succeeded (no doubt) in striking a particular chord with the British political elite.

As is often the case with such attacks in Western nations, news reports released immediately after the attack cited eyewitnesses who claimed there were two people in the car, one described as black with a goatee beard (matching the description of the man shot by police outside Parliament) and the other a white, bald male. But with only one man shot and killed and the official narrative reflecting this, these initial eyewitness reports have been shunted down the memory hole, never to be heard again.

While eyewitness reports are inherently unreliable, this is not always true. In the case of yesterday’s attack in London, how is it possible that multiple eyewitnesses saw two people in a car (clearly enough to define skin color) when there was, in fact, only one person in the car? In other similar ‘terror car’ attacks that involved only one person, like in Nice and Berlin last year, there were no eyewitnesses who said that there were two people in the trucks used. The reason is that there was only ever one person driving.

So rather than dismissing the London reports as the traumatized imagination of ordinary people unaccustomed to such carnage, a much more reasonable conclusion is to assume that there was a white bald guy in the car, and that he fled the scene, and that that was his intention all along, leaving his ‘partner’ to take the fall, literally.

This scenario raises the specter of the Muslim patsy having a handler, possibly someone with nerves of steel and a heart to match. It may have been the white bald guy driving the car along Westminster bridge, mowing down people, as the Muslim patsy sat beside him. As a general rule, ignorant patsies can’t be relied on to carry out ‘terror attacks’ on their own; they might, after all, balk at the last minute.

Now, I understand that this scenario is highly implausible for those who fervently believe that there are no dark corners within the British government that actually benefit from terror attacks against British civilians to the extent that they would have a hand in carrying them out. But to hold that belief a person has to be totally ignorant of the hard official evidence that some section of the British government has, in the recent past, consciously carried out terror attacks against British citizens, and then pointed the finger at someone else.

I won’t go into the details here, but those familiar with the ‘troubles’ in Northern Ireland will understand. For those unfamiliar, here’s a brief introduction. You might also have a quick glance at this (if only the headline) and then this for the connection to yesterday’s London attacks.

Getting back to London; the only video of the SUV speeding along Westminster bridge emerged late last night and was shown on the BBC evening news. I found the same footage on the Twitter account of BBC home affairs correspondent Dominic Casciani and published it on SOTT.net (Casciani removed it from his Twitter account soon thereafter). While the footage has since appeared on several other news sites, SOTT.net was the first news website to host the video and carried it as an ‘exclusive’ (meaning it was not, at the time of publishing, available anywhere else).

As a result, I was contacted this morning by two AP journalists asking if SOTT.net owned the video or if we knew the source. I replied in the negative on both counts, but suggested it might be CCTV footage and therefore the legal property of Westminster city council. One of the AP reporters was able to tell me that he had contacted Westminster city council and they had denied that it was from any of their cameras.

First, check out the video.

There are three initial things to note: 1) the vertical angle is quite steep, suggesting that the video was taken from a relatively high altitude. 2) the video is low quality, suggesting a high zoom level. 3) the position of the camera is to the left of the center of the bridge, making it possible that the camera was located somewhere on the north bank of the river Thames.

With that information, to get an idea of the approximate locations for the camera, we need to look at some images.

Here’s the view up the Thames, looking back at the view from where the video was shot. 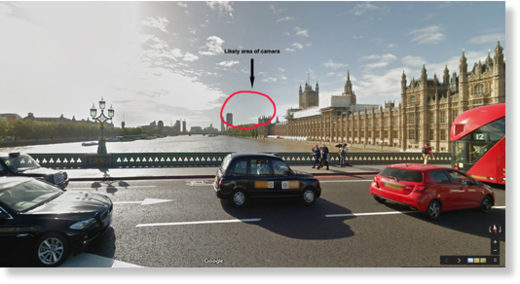 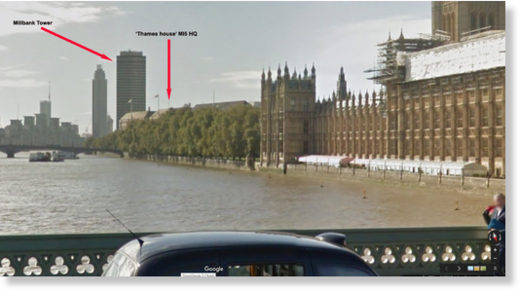 The next image is taken from this Google ‘street view’ link at the ‘altitude 360’ restaurant at the top of Millbank tower. I zoomed the image further after processing and I it seems like a pretty good candidate for the location of the camera (not excluding, however, that it may have been situated on top of MI5 HQ). 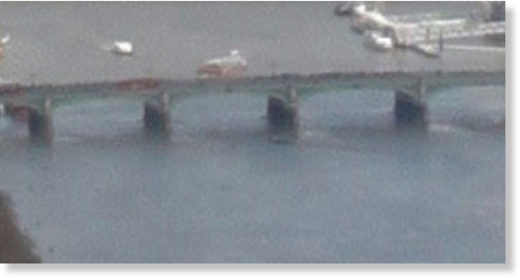 Just for the record, I can find no evidence that there is an automated CCTV or webcam in this restaurant or on the exterior top of the tower that points at Westminster bridge (there might be one at MI5 HQ, however).

So the only question left unanswered (well, sort of) is who happened to be filming Westminster bridge on a grey Wednesday afternoon in March at the precise time that a black SUV containing at least one terrorist was mowing down pedestrians? The answer, of course, is easy: it was a member of ISIS who works undercover as a cleaner at the altitude 360 restaurant (or MI5 HQ). After all, today ISIS “claimed responsibility” for the attack, which was, of course, carried out by one of their “soldiers of the caliphate” who was, apparently, known to MI5 (what a surprise).