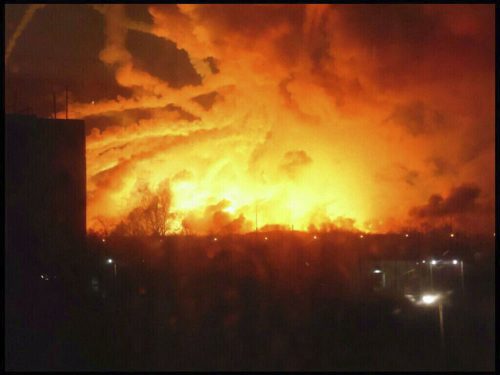 Has anyone noticed how the mainstream media tends to dispense ‘news’ stories to the public as if they were isolated incidents unconnected to anything else? Silly question, I know. After all, you’re probably reading SOTT.net for that very reason (among others). There were a few significant events over the past week concerning Crimea and the ongoing geopolitical ‘war’ between the USA and Russia that fit this pattern of media obtuseness to a ‘tee’, with no context or dot connecting whatsoever, despite the fact that the connections were just screaming to be made.

First, the American landing ship, the USS Carter Hall, with marines on board, crossed the Bosporus Strait and arrived in the Black Sea last Friday for “joint drills with the Romanian Navy.” As can be seen from video released of the exercises, these were on a large scale and involved other landing craft like hovercraft, not to mention air support from military jets.

The exercises lasted for 3 days from March 18th to 21st and took place near the Romanian port of Constanta, the ostensible reason for them being to participate in bilateral training exercise Spring Storm 17 with Romania. Of course, the USA has no intention or reason to invade Romania, and does not believe that they would ever have to do so in the face of, for example, a fabled Russian invasion of the country.

The true reason for such exercises is instead a simulated US/NATO invasion of Crimea that lies just a few hundred kilometers to the East. While the mainstream media would have us believe that the intention of such a move would be to ‘take back’ Crimea for Ukraine, the US’ interest in Crimea has nothing to do with justice or international law but rather with denying Russia its Black Sea fleet port in Sevastopol and therefore Russian naval access to the Mediterranean. This was the primary reason for the US-backed coup in Ukraine in 2013, and the reason that Russia’s immediate response to the coup was to reincorporate Crimea into Russia.

So it was no surprise that Russia’s response to ‘Spring Storm’ was to launch ‘snap’ and ‘unprecedented’ drills on March 20th in Crimea, a clear acknowledgement of the real message conveyed by the US exercise.

“A large scale airborne military drill kicked off at Crimea’s Opuk Training Ground on Tuesday, with more than 2,500 soldiers of the Russian Airborne Forces and 600 pieces of equipment participating in the exercise. Some 350 paratroopers from the Novorossiysk air assault division landed on the Crimean coast as part of the Airborne Force’s large-scale drills on the peninsula’s Opuk Training Ground on Tuesday. The paratroopers as well as nine BMD-2KU airborne infantry fighting vehicles parachuted from nine Ilyushin Il-76 aircraft”.

“For the first time in the Russian army’s history the Airborne Forces’ three large units were simultaneously alerted as part of the drills and partly redeployed to Crimea with weapons and equipment,” said Serdyukov, who was in charge of the manoeuvres.

The Ukrainian junta in Kiev was, of course, equally indignant: “We are keeping an eye on these exercises and the relevant departments authorized to carry out this kind of activity. We are doing this because the exercises are taking place on territory temporarily occupied by the Russian Federation and a large number of personnel of the Airborne Troops of the Russian Armed Forces are involved in it,” Vladislav Seleznyov, an officer at the public relations directorate of the Ukrainian General Staff, told the Krym.Realii website. He added that Ukraine was ready to retaliate in the event of any aggression anywhere on the Russian-Ukrainian border.

This last remark is interesting in light of what happened just one day after the Russian exercises in Crimea ended.

The explosion occurred at a base in Balakliya, near Kharkiv, about 100km (60 miles) from both the Russian border and the ongoing fighting between East Ukrainian separatists and soldiers of the Kiev junta. The depot stockpiled weapons including rockets and missiles that were being used against the citizens of the Donetsk and Lugansk people’s republics. It is very likely, therefore, that this was a case of sabotage by soldiers of these republics, and while it represents a brilliant military (you could even say humanitarian) move on their part, it also reveals the complete ineptitude of the Ukrainian military command and government as it exists under the pusillanimous Kiev junta, installed and controlled by Washington. Despite this, the Ukrainian government has blamed Russia, hysterically hypothesizing that a drone was used to drop a bomb of some description on the depot.

The third Ukraine-centered event that occurred this past week was the murder, in broad daylight in Kiev, of former Russian lawmaker Denis Voronenkov on March 23rd. Voronenkov was a Russian politician and member of the Russian State Duma from 2011-2016. After stepping down as a member of the parliament in 2016, Voronenkov left Russia and settled in Ukraine. From the available information, Voronenkov appears to have been a disreputable character.

While still a Russian MP, he had voted for the repatriation of Crimea to Russia and voiced his support for the breakaway Donetsk and Lugansk. In 2016 when he lost his bid for reelection to the State Duma, he was accused of being involved in an illegal property seizure (worth 127 million rubles) in Moscow. As Russian investigators were preparing a corruption case against him and waiting for his parliamentary immunity to run out in December 2016, Voronenkov fled to Ukraine, received Ukrainian citizenship and immediately became a vocal critic of all things Russian. Last month he compared Russia under Vladimir Putin to Nazi Germany (how original!), condemned the repatriation of Crimea to Russia and denounced the breakaway republics of Donetsk and Luhansk. Now there’s a man with principles!

At the time of his death, Voronenkov had been due to testify against former Ukrainian president Viktor Yanukovych. Voronenkov’s assassin (who was killed by a bodyguard) carried a Ukrainian passport and had been sought by the police on fraud and money laundering charges according to the General Prosecutor of Ukraine. He was also an active member of the National Guard of Ukraine. Given the internecine nature of post-coup Ukrainian politics and the massive business and political corruption that defines it, it is highly likely that, as concluded by the Kiev police, the murder was a contract killing over a business dispute.

But just as they blamed the Balakliya explosion on Russia, Kiev immediately blamed Voronenkov’s assassination on Russia, concocting an elaborate tale alleging that his assassin was actually a Russian spy whose mission was to infiltrate the National Guard and who was trained in a special Russian school for saboteurs created by the Stalin-era NKVD (disbanded in 1946). Heck, Russia even encouraged him to get involved in a financial scandal in Ukraine as a ‘cover’, no doubt! It’s as if they’re trying to sound ridiculous. Then again, people who live within their own reality bubble tend to sound like raving lunatics a lot.

So there you have it, nothing to see here according to the Western media that serves as little more than a mouthpiece for Western imperialism in its primary goal of making sure that Russia is demonized at every turn and the world public kept ignorant of the truth Behind the Headlines.