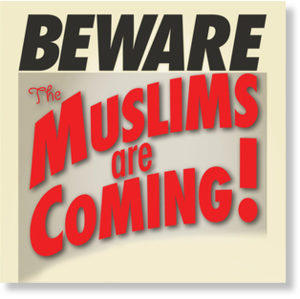 From the humble beginnings that launched the war on Muslim terrorism on the basis of “they hate us because of our freedoms” and we must, therefore, “fight them over there so we don’t have to fight them over here”, Western peoples are now faced with an existential threat and required to chose a ‘side’ or be damned to the seventh level of hell reserved for those who remain neutral in a time of crisis. The options from which we must all choose are fairly straightforward; broadly speaking, you can be ‘left’ or ‘right’, or a libtard or a fascist, if you prefer.

Right-wingers (implicitly or explicitly) argue that:

a) Islam as a religion and social and legal code is totally incompatible with Western values (except for the misogyny and homophobia part). Or to use the words of Oklahoma state legislator John Bennett “Islam is not even a religion; it is a social, political system that uses a deity to advance its agenda of global conquest.”

b) Migration from Muslim-majority countries is therefore bad for Europe

So the question is: who among us in the West will answer this urgent call to arms and hold back the Muslim hoard and defend whitey’s values by spending an extra half hour per day making the case on social media?

In stark opposition to this ‘right-wing’ viewpoint we find (shockingly) the ‘lefties’ who (implicitly or explicitly) assert that the influx of Muslims (and anyone else not guilty of being white and Western) into Western nations is good because it is:

a) An opportunity for each of us to relieve ourselves of the guilt of, and make reparations for, Western imperial transgressions against Muslim and other non-white peoples over the course of the past 300 years

So the question here is: who among us in the West will answer this urgent call to arms to defend and welcome the migrants and expiate white guilt by spending an extra half hour per day making the case on social media?

So, let’s start with the right-wingers.

a) There are about 73 sects, and therefore practices, of Islam around the world. So any talk of Islam as a single belief system practiced the same way everywhere is bunk. The extreme version of Islam known and loved by [some] Westerners today is practiced in a few countries in the Middle East (and Africa). Extremist or Wahhabi Islam emerged in earnest during the 20th century, primarily in Saudi Arabia, which is a petrol station masquerading as a country that has been the beneficiary of political, military and industrial support from the USA and other Western powers for the last 100 years.

Over the last 50 years, the quisling Saudi headchopper royals have spent 10s of $billions on promoting their extremist version of Islam via books, media, schools, scholarships for students (from primary to post-graduate), fellowships and subsidies to reward journalists, academics and Islamic scholars, the building of hundreds of Islamic centers and universities and thousands of schools and mosques.1 They have also contributed vast sums to Western political parties and lobby groups.

About 80% of the real Muslims you have never heard about live East of the Middle East and have no apparent interest in global conquest. The vast majority of them practice the mainstream Sunni and Shia versions of Islam and generally view the Saudi Wahhabi faction as a “vile sect” .

Interestingly, it is said that many Muslims around the world subscribe to the ‘conspiracy theory’ that the founder of extremist Islam was a dupe of the British secret service and Wahhabism was a creation of British imperialists as a means of dividing and weakening Middle Eastern Muslims and the states that were eventually created around them, by the British and French.

b) Migration from Muslim-majority countries is not necessarily bad for Western nations because most Muslims do not necessarily want to conquer the world and enslave all of whiteydom. In fact, during the 20th century, the economies of Britain, France, Germany, Italy and Spain all benefited directly from an immigrant workforce from Muslim nations (many of which were former colonies of these countries). That said, the idea of opening European nation borders to large numbers of immigrants fleeing recent wars started or encouraged by Western powers does seem like a bad idea. A better idea would be for Western powers to stop bombing or fomenting war in those countries.

c) The white race and Western cultural values are not in danger of extinction because, in the event that Muslim migrants and jihadis do overrun Europe, we can just wait a while and, when our Muzzie overlords least expect it, reintroduce European values from Dubai. We could also reintroduce quite a lot of white Europeans from there too. If that fails, there’s no shortage in Asia. But more seriously, I do agree that jihadi mercenaries coming to Europe with war refugees is a serious issue, but it is also one that can be easily solved. Simply write your white Western politician and ask him/her/it to lobby Western governments to stop Western intelligence agencies from funding, arming and training jihadi mercenaries, and possibly bringing them to Europe. You could also highlight the problem of Western governments’ close support for Saudi Arabia and its global export of extremist petro-Islam and jihadi mercenaries.

a) The Western political elite are indeed guilty of crimes against non-white nations, but the idea that the ordinary people of Western nations today share in the blame and should try to make amends is patently absurd. In any case, you do not help the poor or marginalized by becoming like them, lowering yourself to their level out of some misguided and ultimately self-important desire for atonement that is more about you than them.

b) Yes, a lot of the coffee shop pro-refugee intellectuals really do enjoy ‘helping the poor’ because it makes them feel better. Their time would be far better spent learning about the cause of the refugee crisis and speaking out against their government’s hypocrisy and warmongering.

c) Western society can’t be enriched by accepting refugees into Western countries when the only reason the refugees are in Western countries is because Western governments are fomenting war in the refugees’ home nations. Given half a chance (like if Western governments stopped fomenting war in foreign nations), most refugees would be only too happy to take their culture back to where it belongs. Under the current conditions of growing anti-Muslim sentiment in Western nations as a result of decades of anti-Muslim propaganda and manipulated terror attacks, it is the height of ignorance and extremely dangerous for Western citizens to encourage an influx of Muslim refugees into Western nations.

Am I the only one who can see that the approach of both the left and the right lead to the same outcome? One side increases the temperature of anti-Muslim-refugee sentiment in European nations while the other side grows ever more vocal in its demands for European nations to open their doors to Muslim refugees.

So you’ll excuse me if I’m not inclined to submit to the bogus forced choice of either showing some racial or cultural ‘loyalty’ and tarring all Muslims with the terrorist brush or signing up to adopt a Muslim refugee. The important point here is that you can always tell you’re being set up when the only option you seem to have is to pick one side of a polemic, hunker down and wait for the shooting to start.

While both sides of the debate are convinced they have the truth, what they really have are mere perspectives. Then again, most of what passes for truth these days exists first as perspective. When the perspectives of large numbers of people coalesce into an ideology, especially a reactionary ideology, that perspective can become ‘the truth’ when many people act out or participate in the ideology, creating ‘facts on the ground’ which then become part of a new reality. And reality is ‘true’, right?

But these kinds of reality shifts usually occur in the context of heightened emotion, fear, insecurity and anger among the general population. In that state people are not thinking but merely acting on emotions that are a reaction to conditions that may have been engineered (to some extent) to provoke the specific reaction. When people find themselves in a new unpleasant reality they are wont to wonder ‘how did things get like this?’ What they generally fail to notice is the long process of conditioning to which they were subjected, and also that things can, and likely will, get much worse if they continue to respond without thinking to the manufactured conditions with which they are presented.

Consider the situation in Europe today. You have several large European nations with significant percentages of Muslim citizens (6 million in France). In addition there is a growing number of non-citizen Muslim refugees (aka ‘immigrants’). Fifteen years of the war on Muslim terrorism in which millions of Muslims in Middle Eastern nations have been slaughtered by Western militaries and many brutal terror attacks on European soil attributed to ‘al-Qaeda’ or ‘ISIS’ have successfully created a definite anti-Muslim bias among white European citizens. Conditions are therefore ripe for widespread support of pogroms of some description against Muslims in Europe, not just ‘suspected jihadis’ but ALL Muslims. Apparently some white Europeans think this would be a good idea, and are actively lobbying for such measures by mindlessly repeating catchphrases like ‘Islam is not compatible with Western culture’ or ‘there’s something wrong with Islam’, etc. 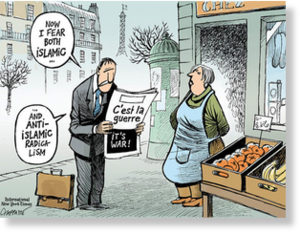 Maybe the problem is that those who lived through the last serious conflict on European soil are now dead and there’s no one to remind us that war is not ‘fun’. That there are no winners. That the biggest casualties in any war are civilians and war does not discriminate between religious beliefs or skin color; everyone suffers. The point being, Europeans who rabble-rouse about Islam being a threat to European values should consider that their ‘perspective’ could easily lead to a ‘civil war’ scenario between Muslims and non-Muslims in European countries. That is to say, a civil war on YOUR doorstep between Muslims and YOU.

The cause of most of humanity’s suffering, on an individual and collective basis, is a lack of truth. But is there a truth that applies to all? Jordan Peterson has suggested that there is. Truth is whatever is good for the society of which each person is an integral part. What is good for any society? The answer to that may be more complex, but avoiding war or the destruction of society would seem to be unquestionably a good thing. Avoiding, i.e. not encouraging in any way, internecine conflict, is therefore the fundamental responsibility of every single person on this planet, and that process starts with careful consideration of your ‘perspective’, where you got if from and whether or not it is good for you AND your fellow citizens AND your society as a whole.

3 thoughts on “The Muzzies Are Coming! Adopt a Refugee!”