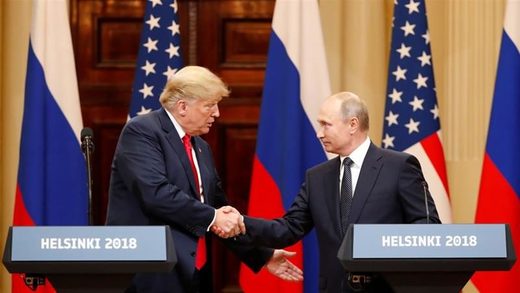 A Russian national has been charged in Washington accused of being an agent of the Russian Federation at the same time as Donald Trump and Vladimir Putin were meeting in Helsinki, a summit that has angered American politicians.

Maria Butina was charged Monday by the US Department of Justice with conspiring to act as an agent of the Russian Federation within the United States, a criminal allegation that may be designed to draw attention away from Monday’s meeting between the US and Russian heads of state.

The charges are not related to the Mueller probe that is examining alleged Russian meddling in the 2016 election. She allegedly worked at the direction of a high-level Kremlin official. Sputnik spoke to political commentator Joe Quinn about the fallout from the Putin/Trump summit.

Sputnik: What do you make of the arrest situation in Washington of Maria Butina, the accusations and the motivations behind it?

Joe Quinn: Well this is another nothing-burger, like CNN described the Russian hacking of the US election last year. Given the timing, it’s an attempt to push the supposed ‘reality’ of Russian interference in the US election in support of Trump. The story of this Butina woman are two-a-penny in Western politics. What she’s doing is called lobbying: getting access to politicians to push particular policies.

The accusations that she was working for the Kremlin appears to be baseless – it’s the silly idea that any lobbyist in any country, anyone working to influence politicians in any country, only ever work for foreign governments. That’s obvious nonsense.

There’s probably dozens of American citizens in Russia attempting to garner the same kind of influence in exactly the same way as she has done.

Sputnik: The US president has also come under scrutiny in America following the Helsinki summit, how could this impact the President and Washington’s interactions with Moscow?

To give you an example, Senator Lindsey Graham tweeted yesterday – in all seriousness – that the football that Putin gave to Trump at the end of their meeting was probably carrying a listening device and should not be taken to the White House! I don’t know what to say to that kind of thing. You just roll your eyes…

I’m sorry to have to say that we can’t really expect the hysteria to diminish. Most of the Western media are now committed to this ridiculous campaign and have internalized the idea that Russia is a threat to the entire globe. Of course, the truth is that this situation has been deliberately provoked by elements of the ‘deep state’ as part of their ongoing war against Russia, who they see as an existential threat to their global power and control. They also seem to be quite happy to have as many people around the world – but particularly in US and Europe – believing complete lies.

Sputnik: The international accusations against Russia are mounting with the US elections, meddling and the Skripal case but with lack of evidence is the Western continuing anti-Russian rhetoric damaging any hope of improving international relations?

Joe Quinn: I don’t think that its damaging any hope – certainly it’s damaging them – but I don’t think it’s damaging any hope. Ultimately I think this campaign that’s been waged is not going to be successful. The problem for them is that history is NOT on their side. They’re not really fighting against Russia but against reality itself. The world has changed radically in the last 20 years – and it’s only just begun. The time is obviously ripe for a new global order based on multi-polarity rather than the sole dominance of a superpower, but the stewards of the empire are VERY reluctant, shall we say, to accept these necessary and inevitable changes, and unfortunately, we have to deal with chaos that they are causing as they try to forestall those changes.