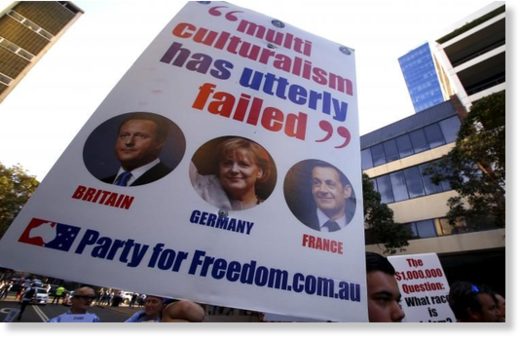 In the aftermath of Boris Johnson’s “letterboxes and criminals” characterization of Muslim women who wear the burqa, and the calls for censorship of hate speech that resulted, supposedly level-headed social philosopher types have again made the point that censorship of such ‘hate speech’ will just push those opinions underground and embolden those that hold them. The correct response, indeed the solution to the problem (we’re told) is not less speech but more speech; all opinions should be allowed so we can ‘get them out there’ and debate them and come to a sensible consensus.

This line of argumentation assumes that if racists, and in particular Islamophobes, are allowed to have their say, not only will their arguments be easily exposed for the ignorant diatribes they are, but that it will quickly become clear to all that such people are in the extreme minority in the civilized West. In that way, the theory goes, these people will be effectively silenced without resorting to restricting free speech. But there’s a problem.

The problem is that it’s not reasonable to suggest that the majority of ‘Islamophobes’ in Europe today are knuckle-dragging throwbacks to the pre-Enlightenment era who are instinctively suspicious of anything with which they are unfamiliar, hence their Islamophobia. The average Islamophobe in Europe today is, rather, a person who has been paying very close attention to the words and deeds of Western politicians and media pundits over the past 17 years. And what he/she has been hearing from those authoritative sources is that Muslims are terrorists with a rather strong aversion to Western people and their ‘way of life’.

Obviously that is not true, but it has, obviously, been the dominant narrative pounded into people’s heads for almost two decades.

From 9/11 and Osama bin Laden to Saddam Hussein’s WMDs targeting London in 45 minutes, to ordinary Iraqis taking up arms and killing US and British soldiers, to the Madrid train bombings, to the London tube bombings, to Gaddafi “killing his own people”, to multiple brutal ISIS terror attacks on European soil and graphic beheadings (etc.) in the Middle East, to Assad “gassing his own people”, to the Western press informing the European people that among the influx of mostly Muslim refugees, there are likely ISIS terrorists; we have all been provided with enough evidence that could lead an otherwise reasonable person to conclude that Islam tends to produce (in at least some of its adherents) a hatred of all that we in the West hold dear.

So while it’s obviously not a good idea that some form of sectarian or race war be ignited in European countries with significant immigrant or Muslim populations (UK, France, Germany, increasingly the Nordic countries and Southern Europe), it’s not at all obvious that the rise of nationalistic and anti-immigrant/anti-Muslim sentiment in these countries can be blamed on simple and uninformed intolerance, racism and ‘white supremacy’. What is much more clear is that, consciously or not, Western governments and the mainstream media have conspired to create the conditions where major social/sectarian conflict – between ‘right wing’ and ‘left wing’ Europeans, between right wing Europeans and immigrants/Muslims (or all of them combined) – is just one ‘aggravating incident’ away.

But we can all take solace in the knowledge that, if and when things go ‘kaflooey’, those that created this situation for us will be on hand to tell us – with full authority – who to blame.
On last Sunday’s ‘NewsReal’ vlog, I expanded on the point made above, in case anyone is interested.