When you read that title what was your instinctive response? Perhaps you think: ‘How terrible it is that a child of 9 years old could so despair as to take his own life?’ Or: ‘How horrible this world can be where some children would bully another to such an extent?’

Both of those thoughts and feelings struck me immediately, but quickly a third question/thought came into my mind: ‘why is a 9 year old boy openly expressing his sexual identity to other school children?’

According to reports, last week 9 year old Jamel Myles was found dead at home after having committed suicide. How exactly he killed himself has not been released, but the coroner is satisfied there was no foul play. Earlier this summer Jamel told his mother, Leia Pierce, he was gay: “He was scared because he is a boy and it’s harder on boys when they come out,” Pierce said. “I smiled at him and said, ‘I still loved him.’ This world is missing out.”

Jamel decided to ‘come out’ at school, and about one week ago, on August 20th, the first day of the school year, he began wearing fake fingernails. Jamel’s older sister has said that he told her that other students bullied him and “told him to kill himself”. Four days later that’s exactly what he did. Jamel’s mother says that she knew nothing about the situation until it was too late.

Many on ‘social media’ have expressed their outrage at the circumstances around the death of Jamel and the evident homophobia and bullying that still exists in a supposedly civilized nation like the USA. The mainstream media has taken the same stance in their coverage of the case. Few seem interested in considering that there might be more involved in Jamel’s death than homophobia and bullying.

Getting back to those unanswered questions; in a world where any rational person knows that being ‘different’ at school is a sure way to bring unwanted attention, under what circumstances would a mother ever lead her prepubescent son to believe it’s ok to talk about his sexual identity to other kids at school? The only reasons I can think of are that a) the mother is hopelessly naive or b) she has been indoctrinated by the ‘social justice’ ideology that has taken hold of millions of minds across the world in recent years.

That Leia Pierce can be counted among the SJW crowd is evidenced by the fact that in the image of her and her son above, she is wearing a popular ‘equality feminist’ tee-shirt. Here’s an image of the same shirt from amazon.com. 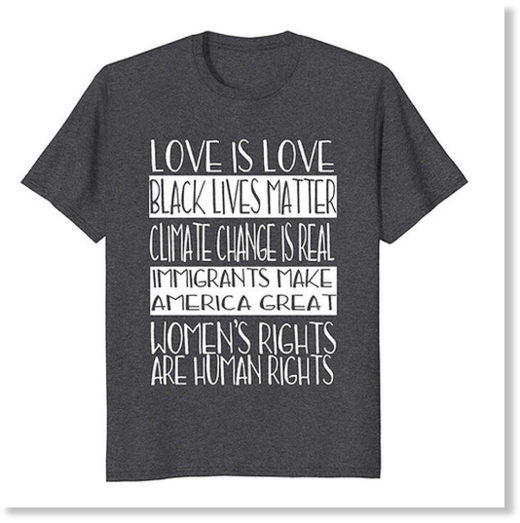 The overly simplistic world view promoted by the message on the shirt and by the ‘social justice’ ideology in general has, understandably, received a lot of criticism in recent years, yet most of that criticism is dismissed by ‘social justice’ advocates – in an equally oversimplified manner – as the atavistic opinion of racists and ‘Nazis’ who should just shut up and go away.

But statements like ‘black lives matter’ and ‘women’s rights are human rights’ are rationally responded to with, ‘ok, but what’s your point?’ i.e. what do you propose to do about those issues? In the case of gay rights and homophobia, the answer from ‘social justice’ ideologues seems to be that we can and should rid society of homophobia by acting as if it doesn’t exist. When evidence emerges that it does, and in this case someone dies as a result, the answer is to shout louder, and increase the likelihood that more children will be sacrificed on the altar of social justice.

This seems to have been the approach taken by Jamel’s mother when confronted with the problem of her 9-year-old son telling her he was gay and that he wanted to tell his classmates about it. He doesn’t appear to have been informed about the likely abuse he would receive as a result, or the negative attention he would get by wearing fake nails to class. As such, it’s hard not to see this as seriously irresponsible on the part of his mother.

Any pedagogue or psychologist will tell you that 99% of children up to the age of 15 can have fluid feelings of sexual attraction towards both genders. Some kids turn out to be gay, but for the majority their feelings prove transitory and a result of hormonal changes in puberty. Yet in the social climate in Western societies today, if a little boy proclaims: ‘Mommy! I want to be a girl!’, far too often time stops. Doctors’ appointments are made. Gender reassignment surgeries are planned. As a result, the people with the least awareness of (or consideration for) human child psychology and physiology have created a world where a 9-year-old child commits suicide as a result of exercising his ‘right’ to come out as gay to his classmates.

Another possible contributing fact in the tragic death of Jamel is his family situation. For decades, repeated studies have shown that children who grow up in one-parent families are at greater risk of dropping out of school, succumbing to substance abuse, crime and even suicide.

In a dangerous world, everyone bears responsibility for their own safety. In the case of children however, parents bear responsibility for the safety of their children until they are old enough to take care of themselves. It was irresponsible of Jamel’s mother to raise him to believe that it is ‘safe’ to come out as gay at 9-years-old to his public school classmates, and not run the risk of severe consequences for himself. A parent does not send their child into the jungle on the basis that they have a ‘right’ not to be eaten by a tiger and that, in fact, tigers should not eat children. Tigers eat children regardless of the delusional beliefs of irresponsible parents. And children suffer the consequences.

2 thoughts on “9 Year Old ‘Comes Out’ to Classmates, is Bullied for Days, Then Kills Himself. Who is to Blame?”