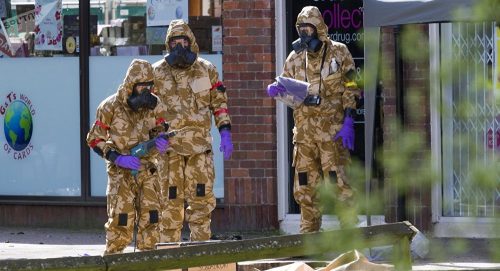 The Russian president said at a plenary session of the EEF in Vladivostok that Moscow had identified the two people suspected by London of poisoning ex-spy Sergei Skripal and his daughter in Salisbury. Putin also said that the suspects are civilians and encouraged them to talk to the media.

Sputnik discussed the latest revelations made by Vladimir Putin with Joe Quinn, a political commentator.

Sputnik: What do you make of latest revelations made by Putin?

Joe Quinn: I don’t think that’s a big deal. It’s kind of to be expected that the Russian government would announce that these people are no one special. They haven’t gone as far as to say what they are doing there, but Putin has suggested they should speak up themselves and say why they were in the UK. But it’s just entirely plausible that they could just be two Russian civilians who were in Sailsbury on that day.

There probably were many different nationalities in Sailsbury on that day and over that weekend; so the fact that the British police and intelligent services were able to identify two Russians in Salisbury or in the area of Salisbury, in London, around that weekend proves nothing.

As far as how the media is responding to it, I was just checking out the Sun newspaper – I’m not sure if that qualifies as the British media – and they said that Putin had stuck up two fingers to the British government by making this announcement. It’s a bit farcing at this point really … and it’s a four- or five-month saga and nothing makes any sense whatsoever.Yet, the British government and the British media continue to run with it because it’s part of an ongoing anti-Russian defamation campaign that’s part of a larger geopolitical war that the West in general is fighting against Russia.

It has to be seen in that context and dirty tricks and fabrications and false allegations are, obviously, part of that geopolitical war.

Sputnik: Can you talk about the motives that you perceive for both sides of the story? The UK is saying that Russia is coming in and using chemical weapons to poison regular British citizens; and that’s horrible, that’s a war crime or something of that nature. Whereas the Russians are saying that they have nothing to do with this and that this had just been set up. Why would the UK want to specifically show that Russia is using chemical weapons on their territory?

Joe Quinn: The idea of chemical weapons has become this kind of meme in the media and around the world basically as the worst thing that you can possibly do.It’s portrayed in that way and is used to demonize heads of foreign governments by Western nations. It’s not surprising that they would try to put those two together and demonize Russia in the same way. Average people and the public know that chemical weapons are bad or they have been told that evil dictators used chemical weapons against their own people; and now you have the suggestion that the Russian government, obviously not on a large scale, but on a small scale, has been using chemical weapons against the British public.

How horrifying for the British public! It’s designed to provoke an emotional response from the British public and to turn them against Russia. As I have already said, it is part of an ongoing long-term mostly information war against Russia by Western governments. And it’s also part of a broader geopolitical war in terms of the West attempting to hold on to its global hegemony and its control against the kind of rise of Russia and also China.

But, obviously, Russia is the major problem here I suppose because of its proximity to Europe and its ties with Europe. The Americans are very concerned about Russia and they want to do everything they possibly can to turn world public perception or opinion against Russia. And they can achieve a lot in that way; but the fact that they are doing that to such an extent is evidence that they can’t really do much else from a military perspective.In times gone by the US would have dealt with a country like Russia by simply overthrowing the government or maybe invading it. But they can’t do that against Russia so they have to go full on with their propaganda war.

Sputnik: There’s one more thing that bothers me still and that is the sloppiness with which this was carried out. Some media is saying that they were sloppy and they did it specially because they don’t care and they want to send a message to other traitors or ex-spies – ‘watch out, we’re going to ruin our relationship with the UK and other Western countries’ – but the other spies who are living in Western countries will be afraid now.

Joe Quinn: It’s nonsense. It might fly for somebody who doesn’t think very deeply about things or who reads too many tabloids. But, in terms of the intelligence community, the one thing that sends a message to members of intelligence communities is that when one of their number dies unexpectedly in an accident, that’s what sends a message.Any spy worth his salt looks at this situation and probably laughs and says that this was an operation carried out by the Russian government. They know that the Russian government and intelligence services don’t operate in this way; they don’t expose to the entire world that they are the ones who attacked innocent civilians with chemical weapons in the UK.

That’s not how it works. Obviously, it’s shooting yourself in the foot; does Russia really enjoy negative attention so much that it would expose itself deliberately by this sloppy way of carrying out this operation? That’s ridiculous.